(Max Forte, author of Slouching Towards Sirte, NATO’s War on Libya and Africa, has reviewed Stephen Gowans’ recent book Patriots, Traitors and Empires, The Story of Korea’s Struggle for Freedom. Also below you can listen to Brendan Stone’s excellent interview with Stephen Gowans.)

In 2018, on September 9, the Democratic People’s Republic of Korea (DPRK, or North Korea), will mark exactly 70 years of existence as a nation-state. How did Korea come to be partitioned? Why has the partition remained in place? Why did communism become the political, economic and social program of North Korea? How did the North come to be an ally of the Soviet Union? What does Korean patriotism really mean, what is its substantive content? What are the practical, social, economic and political meanings of Korean nationalism? What are the prospects for peace between North and South Korea, and between Korea as a whole and the US?

Given the time and circumstances in which I read this book, it could not have been without a keen interest in re-examining the sources of the Korean–US conflict, and the prospects for successful peace talks, beginning with those that took place in Singapore on June 12, 2018. In North America we live in an environment saturated with US propaganda, whether official or otherwise, which advocates sanctions, silence, or war, in order to “tame” an “evil, thug regime” ruled by “psychopaths” (which if anything is dangerously ill-advised propaganda: it can easily apply to the US). Getting past the propaganda, of either side, is obviously an immense challenge—for all of us.

Having received a copy of the book for review purposes, I have to alert the reader to the fact that I could not evaluate it as an expert on Korean history. Instead, all I could do is to read the book just like any educated member of the public would, the same public for which I think this book was intended. For those who know little about the history of the DPRK, and would like a text that is free of the West’s official thinking that has locked away the DPRK behind a veil of obscurity, contrived mystery, and the subject of some of the most awful representations, then Stephen Gowans’ Patriots, Traitors and Empires: The Story of Korea’s Struggle for Freedom will be an informative and thought-provoking volume that synthesizes some very interesting historical analyses. In a futile attempt at brevity, I chose to focus this review on the strong points of the book, particularly those that allow us to extend the material into current debates and focal points of public interest.

Patriots, Traitors and Empires: The Story of Korea’s Struggle for Freedom is Stephen Gowans’ second book in a year, with the last one (reviewed on this site) also published by Baraka Books, which dealt with US intervention in the war on Syria. As readers may recall, Stephen Gowans is the author of the What’s Left web magazine.

After reading this book, most readers who have been steeped in the North American media environment will likely come away with one important realization: that virtually every single thing they have heard or read about North Korea is either an outright lie, or an exaggeration or other error, or at best a representation that is so selective that it constitutes wilful inaccuracy. For those interested in developing an independent perspective on North Korea, this book might serve as a useful starting point. If, on the other hand, you are comforted by the customary recitation of notions of North Korea as a “rogue state” led by “dictator” who is a “thug”…then perhaps reading books was never your interest to begin with.

Read the rest on Zero Anthropology

Listen to Brendan Stone’s interview with Stephen Gowans conducted in Hamilton following the booklaunch in that city.

Published by Baraka Books on September 16, 2017 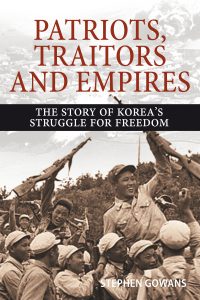